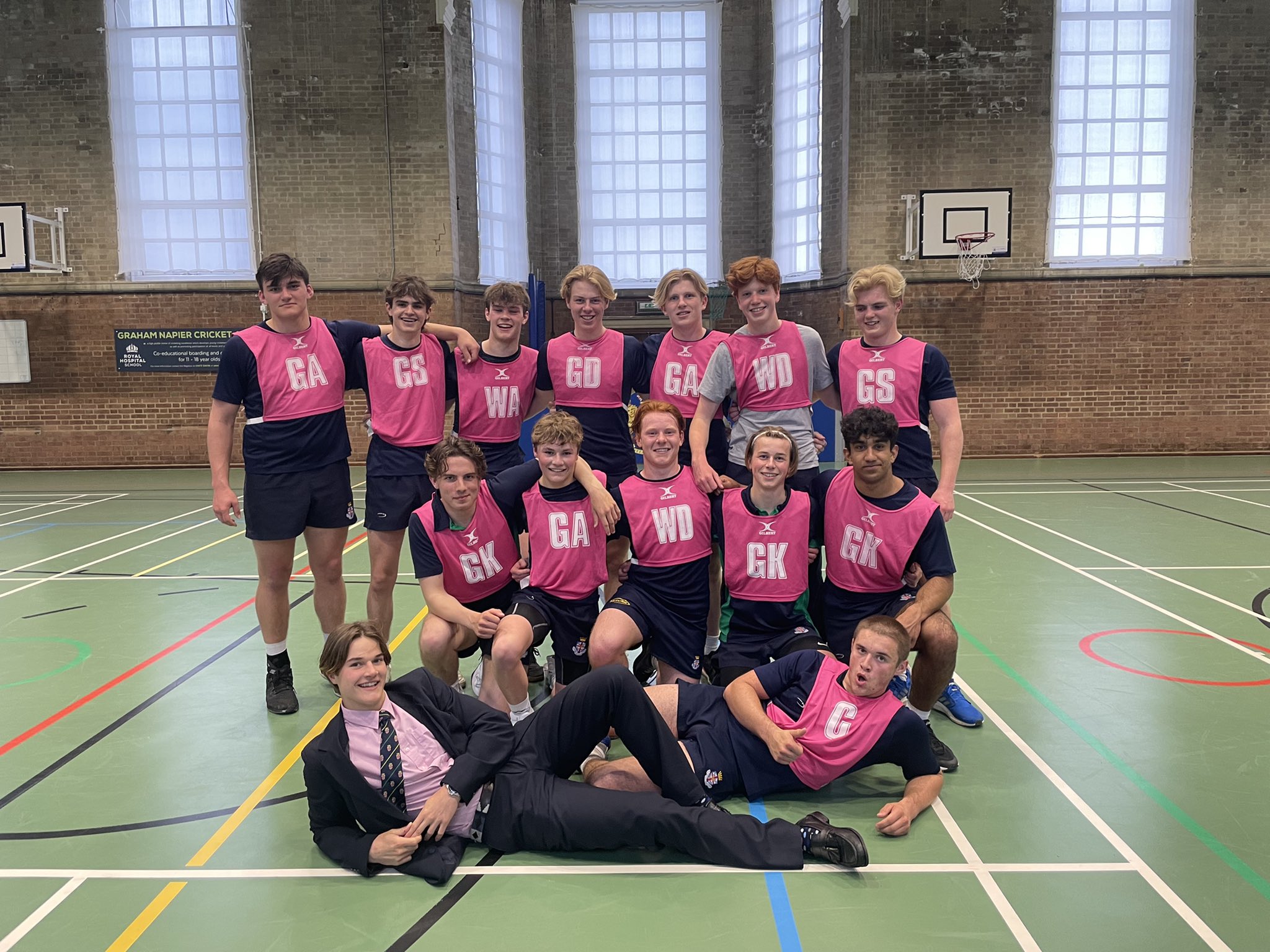 The year 12 netball team took on their fellow peers in a very competitive match, here is Joel S’ report of the match!

“On Wednesday, May 19th, a novel occurrence to took place in the sports hall at RHS. To my knowledge, the ‘not-so-friendly’ match that took place was the first of its kind. What had started out as a passing idea said in conversation, developed into what can only be described as preparation for battle.

In the process of training, anticipating, and playing, all previously held views regarding the intensity and difficulty of netball were washed away. What had been seen as ‘glorified stuck in the mud’, became arguably the sweatiest moment of the week; I personally, among many others, would leave training sessions absolutely drenched. The quick tempo of the game, the constant running and the non-stop focus required really does induce physical stress.

The first training session was devoted to understanding the rules of the game. Once we had got a grip of them, we did a lot of game play, trying to hone our skills in a short space of time. We had two training sessions before the Easter Break; it was great to see our game knowledge progress well in this short space of time. In the session before the game, our match play actually looked like netball, rather than a commotion of flailing arms.

The match got underway at 16:30 with the format being six, eight-minute quarters. Right from the outset, the Boys were introduced to the speed and focus that was required to keep up with the Girls. Needless to say, we got destroyed in the 3 quarters, with the score by this point being 16-10 to the girls.

After our break at the end of the third quarter, the team did some serious evaluation of our play so far and thought about how we could start using our strengths to our advantage. For the next three quarters, we started using our heads and adding some precision to our gameplay. As a result, we were able to level the score to 25 goals apiece by the end of the main match time.

After a brief break, in which the rules for extra time were set, we got underway with another 4 minutes of play. The girls scored an early goal, which put the boys on the backfoot. However, after a swift restart and subsequent series of passes, we were able to level the score once more. With around two and a half minutes to go, it was 26-26. By this point the game had got intense. The girls had the next centre pass but were not able to get a score after some good defence and an interception from the boys. We used this quick transition to take advantage of the disjointed defence. We were able, with around a minute and a half to go, to take the lead. After the score, we used our centre pass to take control of the game, by simply passing it around the court, until the final whistle was blown. After a gruelling period of match play, we had come out victorious!

In good sporting spirit, I believe that this is a good time to make some congratulations on behalf of the boys. I would like to start by saying a huge well done to the girls for putting in an absolutely cracking performance and keeping up the pace throughout the whole game with only one sub. The boys team had the luxury of a whole extra team to use and so we were definitely not as tired by the end of the match as they were. It is hard to give a Woman Of The Match out, as I believe that all the girls put in good performances. Well done to Leila G and Charlotte P for scoring some brilliant goals throughout the game. To Grace R and Savannah C, who were easily the fastest players on the pitch at centre and wing attack, making it unbelievably hard to defend at times. Martha A and Gen A did a brilliant job at wing defence, transitioning the ball up the court really nicely. Lastly, well done to Rosy F and Rachael I, who put in a huge defensive effort against some very tall opponents.

Now on to the boys. With so many players to go through, I think it would be prudent to go through some noteworthy performances. Congratulations to Archie K, who was able to merge rugby and netball by doing a sweet out the back pass. Well done to Angus W, who, despite his height disadvantage, was one of the top goal scorers of the day. To Casper A-D, who successfully played two positions at once during his short tenure at wing defence. Congratulations must go to Archie L, who put in a solid effort at goalkeeper, was well as remembering that we were playing netball, not basketball. Lastly, well done to Eli G, who, despite a short lapse in performance quality when he got ‘boshed’, put in a stellar effort.

To finish with, some thanks are due to a few people. On behalf of all the boys, thank you to Ms A and Ms P for providing us with some quality training ahead of the match. Thank you to Mr C for assisting in this effort, as well as helping us out with tactics on game day. Lastly, thank you to Archie F for organising the event and being an compassionate and humble team captain, we owe the win to you Sir!”

Tune in a few weeks before the rematch to see which boys Grace R would put in her ‘dream super-league team’! 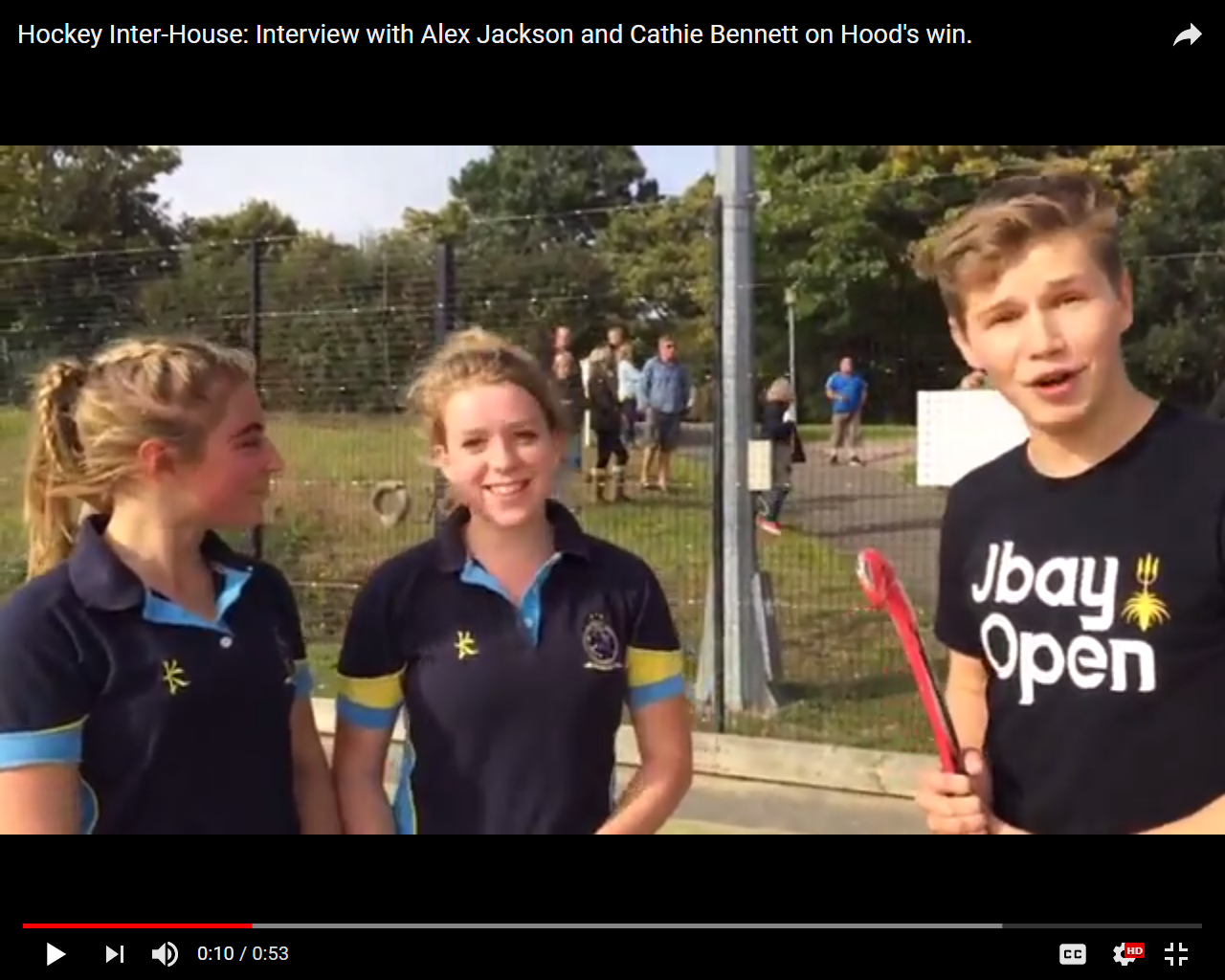